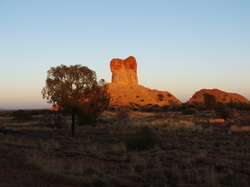 This eleven day tour travels from Adelaide to the centre of the continent – Central Mt Stuart – and returns.

It celebrates and commemorates the 150th anniversary of John McDouall Stuart and his Companions crossing the continent and returning without loss of life. This unique tour will visit ‘Stuart’ locations not normally available to the public; some of these will be memorable both for their beauty and their relevance to Stuart’s success. We won’t be too fixated on him, however, as we want to enjoy all aspects of touring the great Outback.

It is a fully catered camping tour. Swags are supplied, as are meals. One night will be spent in an Alice Springs motel with a tour members dinner (dinner at own cost) at the Overlander Steakhouse, which has a feature dish called Mr Stuart’s Tuckerbag. Cost for a fully catered passenger is $ 3,700.

The tour is also available as a self-drive Tag-along tour, suitable only for high clearance 4WD’s. Self provided Tag-along cost is $1,200 per vehicle.

Participants can expect to be immersed in the magnificent outback environment. Recent years of extra-ordinary rainfall in Australia’s interior have created a botanical and wild life extravaganza, unlikely to be seen again in our lifetimes. A deep understanding of the historical environment will compliment the geographical, botanical, ornithological and land use aspects of the trip. It will be led by Rick Moore, President of the John McDouall Stuart Society, and Dean Harris, the Vice President. Both have travelled this route many times and bring a wealth of experience and knowledge to the tour.

We will avoid boring bitumen driving wherever possible and take tracks and roads less travelled. 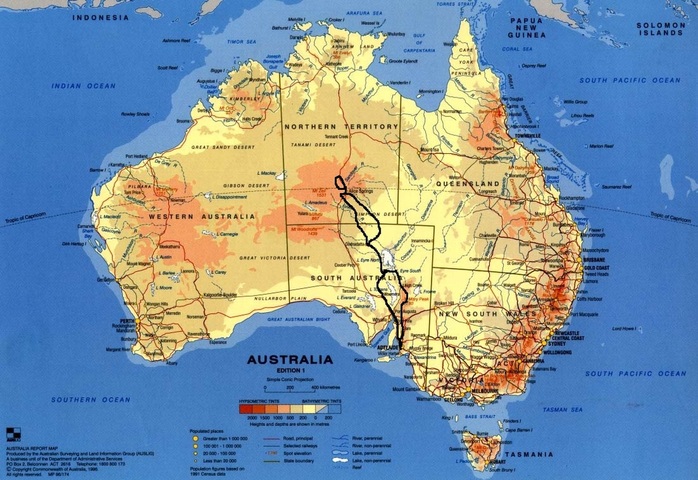 Day 1.
Departing from the very spot the 1861 Expedition left from in North Adelaide, we travel to beautiful Melrose and inspect Stuart Street; then onwards through the magnificent Flinders Ranges to Kekwick's Tree (an enormous redgum where it is alleged that Mr Kekwick camped) near Blinman and our first camp. Today's is a lovely drive to start our trip with.

Day 2.
Travelling via Glass Gorge, we inspect a Stuart monument at Moolooloo Station and pass through the Parachilna Gorge on to the western plains, past Mt Stuart, through Beltana and then Puttapa Gap, past Decoy Hill (built & named by Samuel Parry in 1858) and thence to Marree. It is here that we encounter Hergott Springs. We will see many more mound springs over the next few days but this one became pivotal for all travellers. Passing Hermit Hill with its strong aboriginal stories, we'll camp on Stuart Creek Station, adjacent to the old homestead. We'll be using those tracks less travelled.

Day 3.
Then it's a great day in terms of geography and history as we visit at Mount Hamilton (where Stuart rebuilt a cairn), The Bubbler, William Creek (yes, time for a lemonade or two), Overland Telegraph Line sites and the longest narrow gauge railway bridge in South Australia, Algebuckina. This is the heart of Stuart country.

Day 4.
Onwards through Oodnadatta and Abminga to Finke, roughly following the old Ghan Railway Line route. We'll be a bit more comfortable than those passengers were, and we won't be travelling at twenty miles an hour, either. Finke is now-a-days known as Apatula and the Finke River is a spectacle, dry or running. Stuart named it after close friend & sponsor, William Finke. Still onwards over the ill-reputed Depot Sandhills to our camp.

Day5.
By way of crossing the Charlotte Range, we'll see Chambers Pillar set far off in a  sea of ribbon-like sand dunes. We will spend an evening and a dawn here so that this impressive feature can be enjoyed in its glorious colours and setting. Chambers Pillar is a photographic Australian icon and one of the better known geographical discoveries of Stuart. There is a new campground we must utilise here, and we'll have to collect firewood along the way.

Day 6.
Stuart travelled along a significant river he named the Hugh, and so will we. On his 5th Expedition he named Lawrence Gorge, and we will pass through it en-route to Owen Springs (site of the first pastoral station in the N.T.). From here we can see Brinkley Bluff in the MacDonnell Ranges. This is truly the Red Centre, and we'll be on Stuart's tracks often. Tonight we will stay in an Alice Springs motel; luxury creature comforts can be attended to. The Overlander Steakhouse has a dish called Mr Stuart's Tuckerbag, so that's where we will have dinner and perhaps we'll be lucky enough to have a few significant locals join us.

Day 7.
Anna's Reservoir saved Stuart's life and we are now headed there - via the Stuart Highway. A cattle station approximately the size of Tasmania was once based here at Anna's Reservoir; it's a grand place to camp. From here we can see some other features Stuart named and a cones of stone he erected.

Day 8.
This morning we hope to see the attractive bean tree Stuart, Kekwick and Head discovered as we head to Central Mt Stuart, scene of Stuart's great 1860 triumph. This is the feature which solved the great Nineteenth Century global geographical riddle.  We'll pause at here before we head south, travelling through Alice Springs on our way to camp on Old Andado Station.

Day 9.
Continuing south, we pass through the floodout of the Finke River (a significant contrast to our previous encounter with the Finke River), through Mt Dare and back onto the Oodnadatta Track. We will inspect an interesting feature erected by the Royal Geographical Society at Warrina railway siding and we'll camp on Bugadillina Creek.

Day 10.
Today we are heading for Gregory Creek, in the Lake Eyre South Drainage Basin. We'll stop on the shores of that mighty playa, and reminisce about explorers Eyre, Warburton and Babbage as we arrive at our final camp near New Year's Gift Bore, north of the Olympic Dam mine, on the Borefield Road.

Day 11. Our last day sees us travelling via Roxby Downs (site of the world's largest uranium mine), Woomera - where rockets were once despatched from -  and Pt Augusta to Adelaide, where our Expedition concludes.

Please use the Contact tab in the menu to book this trip or to enquire about any facets of the trip.

Because of unforseeable events and conditions, The Real Outback reserves the right to alter this itinerary without notice.