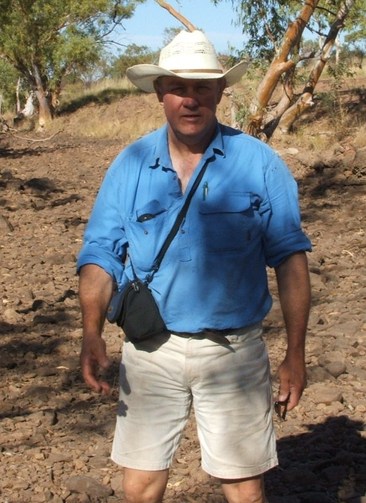 Rick in bush attire.
Rick Moore is the owner/operator of the Real Outback.

He has a lifelong background in the rural industry. Rick has managed large properties, bred and trained sheepdogs, broken in horses, shorn sheep and worked in muddy cattleyards. For a few years he  operated his own farm supplies business in the Murray Mallee of South Australia. He has also worked for a large animal health products company, his territory stretching from Darwin to Mt Gambier.

Most recently he has been working as a driver and guide for Diamantina Tours and for Rex Ellis’ Bush Safari Co.

His major area of interest is the exploration and pastoral history of S.A. and the N.T. In particular, Rick concerns himself with understanding the history and geography of the land that was opened up from the 1840’s to 1880’s. He has re-traced most of John McDouall Stuart’s routes and has published papers and articles about exploration and history. He has a detailed knowledge of the European explorers as well as the Overland Telegraph Line and its impact on the nation’s development. His passion is for the arid lands. 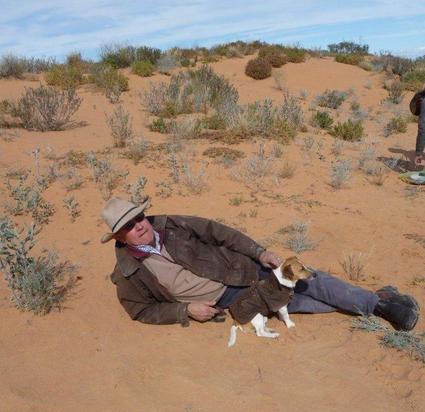 Rick & Billy - during winter in the sandhills of the lower Cooper Creek.
For 40 years he has been driving thorough the Outback, in a variety of 4WD’s. He currently has a state-of-the-art 4WD and a very well equipped supply trailer. He has traveled through all the deserts, run private scientific charters, conducted field trips for up to 70 people and has worked with BBC Television England, BBC Television Scotland, Channel 7 (Adelaide & national) and both Australian and Japanese television documentary makers.

Rick currently spends about 80 nights a year in his swag, investigating the great arid interior of Australia, enjoying the spell of a campfire and, of course, a meal from the camp oven.